skip to main | skip to sidebar

The Rustic, Rugged Joys of Lutherock

A week ago, we'd have been making the drive from Jacksonville, Florida to the high mountains of North Carolina.  My spouse had a meeting at 2:00 at Lutherock, the Lutheran church camp near Newland, NC.  For more on that drive, see today's post on my creativity blog.

I was excited to go along because I've never been to Lutherock.  I've spent a lot of time at Lutheridge, the church camp near Asheville, NC.  Lutherock is very different.  The campers have a much more rustic experience.

For example, instead of eating in a dining hall, they eat in this structure: 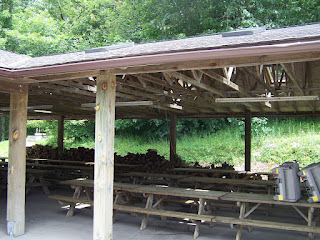 We never made it to the tents, but I imagined they were like the Girl Scout camps I've seen:  permanent platforms with huge, permanent canvas tents, structures that sleep 8-12 children and a counselor.

I might say "Summer Camp," and you might think of arts and crafts or music camp or canoes on a gentle lake.  Campers at Lutherock do much more rugged activities: 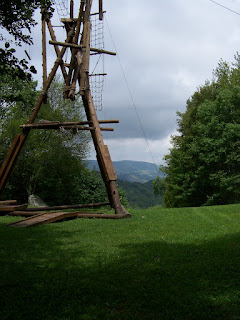 We hiked up a steep hill to get to this structure.  There's a different path that leads to a rock climbing experience, but it's been many years since I scrambled hand over ankle to get up a trail.  We decided not to try that one.  Heck, we didn't even do much more on this path than stare up at this Alpine Tower: 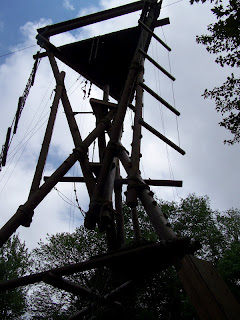 I must confess that I spent most of my time rocking on the porch at the retreat center: 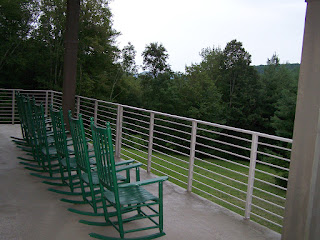 The retreat center at Lutherock is much less rustic.  Of course, it's also much newer: 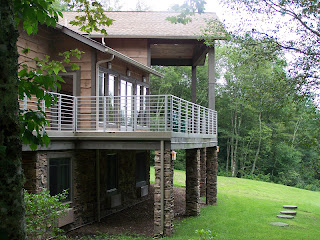 The surrounding environment is much more rural and rustic at Lutherock.  There's not a WalMart for miles.  The Newland grocery store is not a national chain.  The roads to get to Lutherock wind and twist.  At Lutheridge, you drive up I26, take the exit, make 2 right turns and you're there.  It's hard to find a view that doesn't include something humanmade.  Not so, at Lutherock.  Here's the view from the porch: 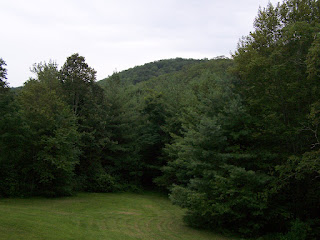 To be honest, I did spend a lot of time looking at the beautiful flower beds.  But they're planted with native flowers: 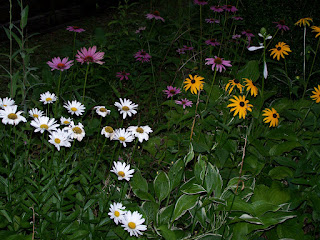 And there's the occasional Christmas tree farm off in the distance.  But I prefer to see Christmas trees in their youth to the neon signs of a crasser commercialism. 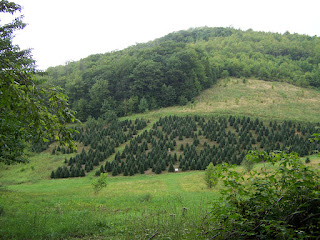 Posted by Kristin Berkey-Abbott at 5:26 AM

I'm a lifelong Lutheran, and although I'm aware of some of the problems with Liberation Theology, it has spoken to me for much of my adolescent and adult life. All of the thoughts on this blog are mine (or those of commenters), and I don't intend to speak for any other Lutherans or Liberation Theologians.

Kristin Berkey-Abbott
Hollywood, FL, United States
A poet, a scholar, an administrator, a wanna-be mystic--always wrestling with the temptation to run away to join an intentional community--but would it be contemplative? social justice oriented? creative? in the mountains? in the inner city?--may as well stay planted and wrestle with these tensions and contradictions here, at the edge of America.

Click on the image of the cover to order a copy of my chapbook of poems at pre-publication price.

My Poetry and Creativity Blog

To read my posts on creativity, poetry, and a host of related topics (and the occasional poem of mine), go here. You can also order both of my chapbooks from links on the creativity blog or contact me to purchase a signed copy of either book.